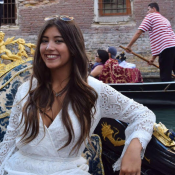 More than 50% of cancer patients receive radiation therapy at some point during their care. Previous and ongoing studies have demonstrated that metallic nanoparticles like gold nanoparticles, can amplify the radiation dose by facilitating the ejection of low-energy (short range) photoelectrons. This radiation enhancement leads to increased DNA double strand breaks (DSBs) in nearby cells. When molecular targeting methods are employed, the increased DNA damage can be confined to specific subpopulations (e.g. cancer cells, tumor vasculature, etc.). Single strand breaks (SSBs) are normally repaired by base excision repair (BER). Poly ADP ribose polymerase (PARP) is a key component of BER and PARP inhibition leads, therefore, to persistence of SSBs. A replication fork may encounter a persistent SSB during DNA replication, which causes the replication fork to collapse or the formation of a double strand break. Previous studies have shown that agents such as PARP inhibitors (PARPi) can inhibit and prevent the repair of DNA double strand breaks caused by radiation damage. By inhibiting DSB repair, PARPi can amplify the effects of radiation therapy. My project will explore a strategy to combine the radiosensitizing ability of gold nanoparticles (AuNPs) in synergy with the DNA-repair inhibiting ability of PARPi. The hypothesis is that combining these treatments will lead to a greater therapeutic effect than each alone. To test this hypothesis, I will a) synthesize a liposomal formulation encapsulating functionalized gold nanoparticles in the aqueous core and PARPi in the lipid bilayer of the liposomes (Figure 1), b) characterize and test their in vitro efficacy in non-small cell lung cancer (NSCLC) cell line Calu 6, and c) evaluate the in vivo benefit of combined PARP inhibition and nanoparticle-amplified radiation therapy in mouse models of lung cancer. Standard assays to evaluate the cytotoxity (MTT), cell proliferation (clonogenic survival) and DNA double strand break (gamma-H2aX staining) will be carried out.